Chased by an Elephant 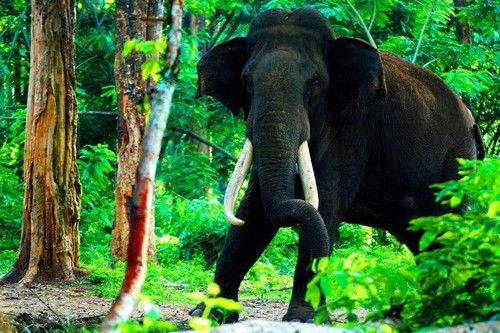 “There is no description, no image in any book, that is capable of replacing the sight of real trees, and all the life to be found around them, in a real forest” – Maria Montessori

It was around 6 in the evening, and we had just had a long trek in the forests of Wayanad, the beautiful green paradise, nestled in the mountains of Western Ghats, Kerala. We were in a Jeep- my dad, few guards, and myself. The Jeep was designed for those bumpy rides, very uncomfortable, but you get used to it and even begin to like it after a little while. I was hungry, growing impatient, and bored by the monotonous ride in the dark, so I started counting the number of hills we climbed. Each hill represented a milestone closer to food and rest. Just when we were about to reach the top of a hill, we were faced with this large dark figure before us, and it was moving. Before we knew it, it came closer and closer. The guards started shouting in Malayalam, “Quick! Reverse the jeep! There’s a lone wild elephant”. Apparently elephants aren’t a threat when they are in their herd, but when they are alone, especially if it’s a male elephant, they can be extremely dangerous, capable of overthrowing Jeeps and killing people. Reversing down a hill was hard enough, but it was even worse because we could see very little in the dark. I could literally hear the elephant stomping, chasing us. He chased us for about a mile, and then walked away. An experience I will never forget, and lived to tell!
I grew up with a close relationship to nature… to the wild, as my dad (Acha) worked for the Government as a Conservator of Forests. A trek into the forests, often several hours, was one of the richest of experiences I’ve had. Acha had a standing order that we remain quiet the moment we entered the forest; being attentive to the various sounds, observing carefully for the slightest of movements, and sensitive to different smells. We often had a pair of binoculars, a book on Indian birds, which we used to identify the birds based on their size, the shape of their beak, the colour of their feathers, and their movement. We were taught how to tell how long ago a particular animal had passed by, by their pug-marks, the freshness of their poo, freshly chewed barks, twigs that gave us an idea of which path we should avoid in our trek.
The smell of fresh air, the continuous notes of the male Cicadas by night, the sounds of wild boars wallowing and grunting in the mud, the awesome feeling of having a millipede walk with its million feet on your hand… life couldn’t get any better than this!

“If we want children to flourish, we need to give them time to connect with nature and love the Earth before we ask them to save it” (David Sobel, in ‘Beyond Ecophobia’)

No one taught me about Stinging Nettles or Mimosa Pudicas, I knew exactly what they were capable of. I learned about fern spores through the white and golden tattoos they formed on skin, long before I had a lesson on Pteridophytes in my Botany class. Before someone could tell me about the lifecycle of the frog, I discovered it myself when by mistake caught a tadpole in a glass bowl from a pond, thinking it was a fish and it started growing legs!

What experiences are we robbing our children in the name of protecting them from risks? Where do we draw the line? What can we do to counter what Richard Louv described as “Nature Deficit Disorder”?

“It is necessary to place the soul of the child in contact with creation, in order that he may lay up for himself a treasure from the directly educating forces of living nature” (Maria Montessori,  in ‘The Montessori Method’)