My interest in the area of gender was sparked when I started working in early childhood education and care (ECEC). It did not take me long to realise I was amongst the few brave men to enter a predominantly female sector. While I was doing my degree with London Metropolitan University (LMU), I delved deeper into the issue of gender diversity, which exposed me to different perspectives on gender. I was particularly fascinated by the 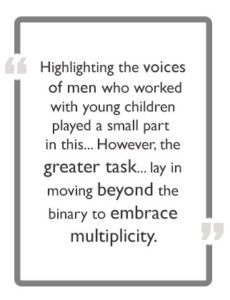 feminist poststructuralist perspectives, that framed gender as multiple, shifting and performative. This inspired me to start The Male Montessorian (TMM) in the year 2015 as a way to trouble reductive and essentialist views of gender. The platform aimed at telling alternative stories. Highlighting the voices of men who worked with young children played a small part in this. However, the greater task of TMM lay in moving beyond the binary to embrace multiplicity. We did this through articles, interviews, engaging in discussions and dialogues around the topic of gender.

Beginning of 2016 I produced a video in collaboration with the Montessori St. Nicholas Charity called Men in Montessori as a way to initiate some conversations around gender diversity. In this project, I interviewed training organisations, school owners, and male teachers, in order to dispel some of the discourses that framed men as high-risk to children.

As I further immersed myself in literature and policy strategies in relation to the gender of the workforce, I realised that the discourses surrounding recruitment of men were often based on outdated, essentialist and deterministic perspectives of gender, and failed to capture the complexities involved in the production of gender. At this point I felt pursuing a PhD would be the best way forward to continue grappling with the complexities, or as Donna Haraway says ‘stay with the trouble’ (2016, p.185), and in turn generate new knowledge in the area.

Currently, I am doing my doctoral research at Middlesex University under the guidance of Prof. Jayne Osgood and Dr. John Barker. I have since developed and narrowed down my research to investigate how gender of the workforce is materialised in a Montessori classroom using feminist new materialisms. Feel free to follow me on ResearchGate or Academia.

We are always looking for people to contribute to TMM. If you are interested, please get in touch via the contact form.