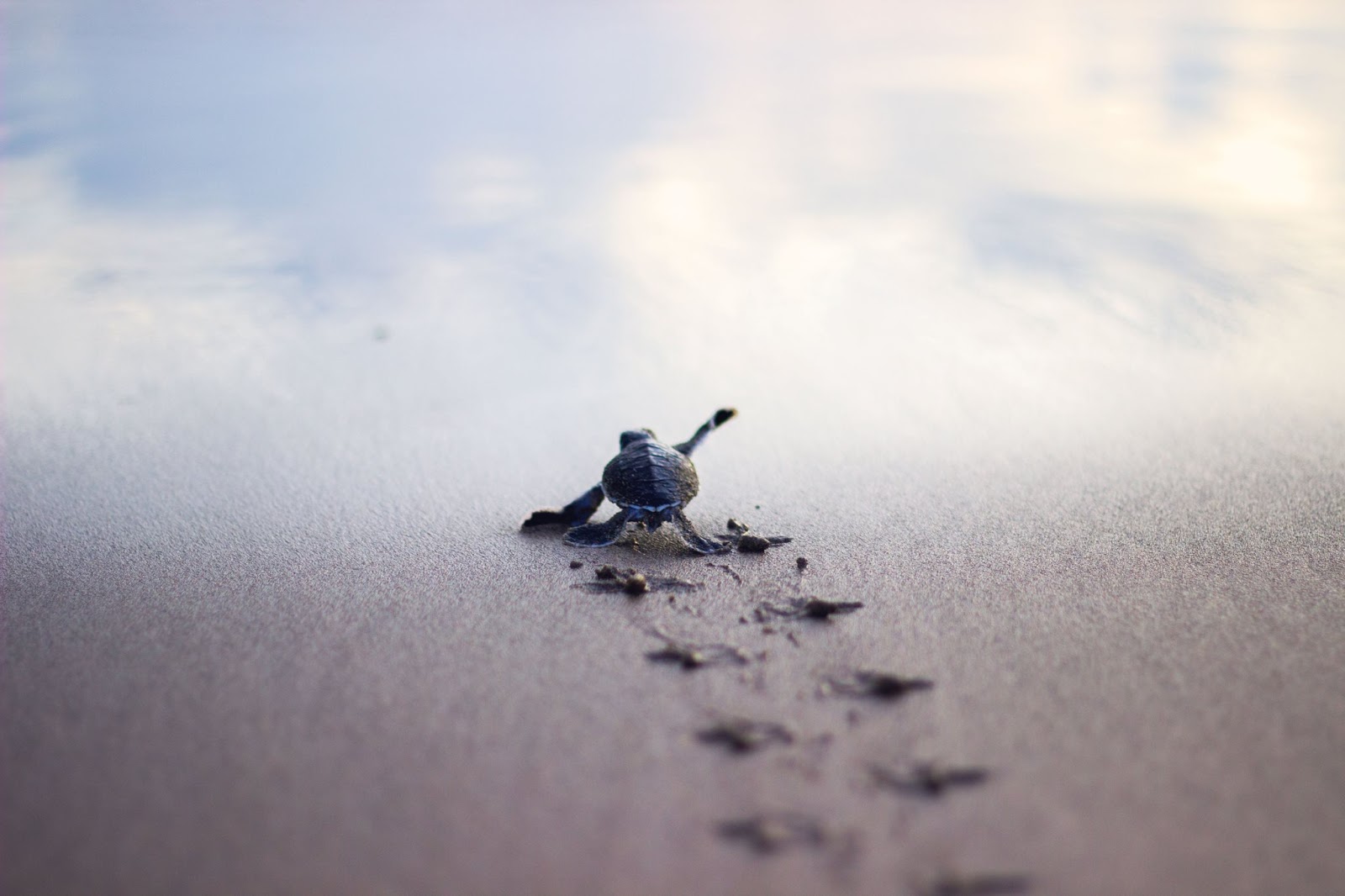 I was recently watching a video of baby sea turtles hatching on the shores of Queensland, Australia. The moment they emerge from their underground nests, they immediately start scrambling to the sea. How do these thumb-sized turtles know where to go? How do they know which way the ocean is? Scientists now believe that these hatchlings have an innate instinct that leads them in the brightest direction, which is, normally the moonlight reflecting off of the ocean. This is the very reason why Sea Turtle Conservancy have worked hard at minimising the amount of artificial lighting used near nesting beaches. Baby turtles that are exposed to these artificial lights are drawn to the land, and often get eaten or run over.
I find this intervention fascinating as this is what we do in our Montessori classrooms. As practitioners, we sensitively and carefully prepare the environment.  We religiously protect and trust the instincts of children to construct themselves.

I think this is one of the most powerful observations that Dr. Montessori brought to the world of education. Children actively construct themselves when a developmentally appropriate learning environment is provided.

If we take this thought and practice into the area of gender formation, I find that it gets more difficult as we have to battle with the “artificial lights” of gender stereotypes that the child is exposed to. The child comes to us, at 2 and 3 years of age, having already formed gender schemas. They are not a tabula rasa or ‘erased slate’ like how Locke suggested. So… where do we start?

1.     Start with the children
McNaughton (2010, p.108) tells us, “The most potent source of information for children’s gender knowings are the children themselves.”
As early years and Montessori practitioners, observation is the keystone of our practice. As trained observers, we have to see that observation is not merely a ‘seeing’ thing, but it also encompasses listening, and listening deeply. There has been a lot of focus on listening to young children in the past 10 to 15 years both politically and academically.
I have been particularly fascinated by the incredible power of pretend play. Through it, we are given access to the socio-cognitive world of children. What gender roles and relations are they acting out? What existing gender schemas can we observe?
A while back I was observing two children – a boy and a girl – pretend playing outdoors in the mud kitchen area. I couldn’t help but notice how the girl stayed in the mud kitchen area and how the boy waved good-bye saying “Thanks for the lunch. See you after work”.  Were those roles and relations coincidental or was it an expression of the gender categorisation within the minds of the children? We will never know until ‘pedagogy of listening’ permeates our practice.
As Loris Malaguzzi tells us in his poem, The Hundred Languages of Children: “there are a hundred ways of listening”.  It is not enough to merely listen to what is verbally said. What is their body language telling us of gender attitudes? What do children’s paintings tell us of gender relations? What does their block play show us about their gender construction? What about the movement, dancing, and the music they create?

“The most basic of all human needs is the need to understand and be understood. The best way to understand people is to listen to them” (Ralph Nichols, 1957)

2.       Dialogues
Language is a powerful tool, which can be used to deconstruct gender normatives. Through the active process of talking with others, listening to them and being listened to by them, children ‘gain voice’ and can engage in conversations with different voices and perspectives of the world.

What questions can we ask that will aid the progression of thinking? What information can we bring to the dialogue that can give material for the child’s ongoing gender construct?

Storytelling is another way that will encourage engaging discussions. We can seek out books that will challenge stereotypes; books that celebrate diversity, equality and inclusiveness.
3.       Role model

As Montessorians we like to take pride in the fact that our environments are gender neutral. This is true when it comes to the materials provided, but we forget that it is not so much the materials that

are gendered, but our interactions with children.

“First remove the beam from your own eye and then you will see clearly how to remove the speck from the eye of a child” (Montessori, 1966, p.149)

We need to deeply reflect upon our own beliefs and attitudes on gender. It would also help us to follow our own thread of thoughts during our interactions with children. Our interactions with them can either protect or transform their identities.
The following statement may seem controversial, but when it comes to gender it is not enough to simply “follow the child”. As we “follow the child” in their gender construction, we must be on guard for those “artificial lights” that will lead them astray from realising their greater potential.

Have a look at this wonderful footage of baby sea turtles racing to the ocean in the coasts of Australia!