A critical exploration of the role of men in early years

Whilst watching a video some time ago that promoted men working with young children, I couldn’t but notice how all the men interviewed in the video occupied senior leadership positions. This made me wonder… Do men who come into the early years sector bring in their ‘male privilege’? Are traditional and essentialist perspectives of men being ‘the breadwinner’ or naturally predisposed to ‘leading’ sustained by those within the sector? Does having more men in early years really resolve gender inequality issues?

Within the UK context, the past few decades have been marked by government initiatives and recruitment drives that have focused largely on attracting more men into the sector. This intensified call for more men has been framed within the context of moral panics and media scare stories of underachieving boys which has been attributed to the ‘feminisation’ of education.

In order to fully understand this hyper-focus on the recruitment of more men in early years, I thought it would be helpful to explore the historical context to better understand the motives behind it.

Role of men in early years in 1800s: Owen and Wilderspin 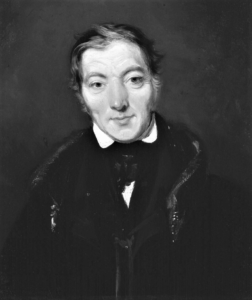 In the early 19th century, Robert Owen, a Welsh social reformer and the founder of the infant school movement in the UK, believed that ‘a new society’ could be formed by transforming the school environment (Harrison, 1968; Owen, 1920). For Owen, the role of the teacher in his schools was not defined by their sex, rather by their ‘unceasing kindness…to all the children’ (Owen, 1920, p.319; Burn & Pratt-Adams, 2015).

However, soon these roles began to shift as Samuel Wilderspin became a prominent figure in the Infant School movement. Wilderspin believed that men were best suited for teaching young children, and that women did not possess qualities such as physical strength and intellectual power, that were required for teaching young children (McCann, 1966; Burn & Pratt-Adams, 2015; Lovett, 2013; Wilderspin, 1824; Clarke, 1985). His views on the role of men in his schools were an outcome of ‘powerful patriarchal 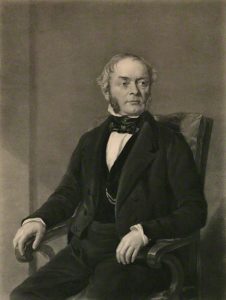 discourses… supported by religious beliefs’ (Burn & PrattAdams, 2015, p.20) driven by an attempt to reproduce family structures in public domains (Clarke, 1985). Women’s role in the infant schools, therefore, occupied the traditional Christian status of ‘a helper’ (Genesis 2:18, New International Version). This was further reflected in the average pay, where men were paid on an average £70 per annum, while women £35 per annum (Turner, 1970). Wilderspin’s movement, however, lost impetus in the 1840s and soon men took on a status of theoretical experts, while the actual work with children became a domain of women (Clarke, 1985).

These roles within ECEC were further consolidated by the work of Froebel, who believed that women were best suited for this role ‘as they possessed an innate maternal tendency’ (Hilton & Hirsch, 2000, p.12). Considering the social status of women during the time, where the very thought of women needing an education was seen with disdain, Froebel’s emphasis on ‘higher education for women for the purpose of teaching young children’ (Ailwood, 2008, p.159) was indeed a step forward in raising the social status of women. However, Lewis (1984) calls this ‘Civic Maternalism’, arguing that despite the professionalisation of teaching, women continued to stay within the parameters of the domestically accepted role of mothering.

As a result of the Education Act 1870, formal education was made compulsory for five-year olds. The gender segregation was clearly evident in the different curricula that were provided. The curriculum for boys aimed to prepare them to be leaders, factory workers and soldiers, while the curriculum for girls sought to educate them for domestic roles (Skelton, 2001). Even though the curriculum promoted mixed sex infant classes, the children were separated when they got older, where men were seen as suitable to teach boys, and women, girls (Burn & Pratt-Adams, 2015). The Education Act 1870 is often seen as a step forward into making education accessible to the working class, however, Purvis (1995) suggests that one of the intentions that drove its implementation was an agenda to impose upon working-class the middle-class family structure ‘of a male breadwinner and an economically dependent, full-time wife and mother’ (p.9).

Interestingly, during this time, there was also a surge of unqualified women who were employed to work with young children, which further positioned women as ‘merely re-enacting their domestic roles in public’ (Burn & Pratt-Adams, 2015, p.26). This alarming increase of uncertified female infant teachers also led to the depreciation of early years’ teacher status. Ozga & Lawn (1981) argue that as a result of this ‘women were used increasingly as cheap labour’ (p.72).

In 1919 Margaret McMillan, one of the pioneers in nursery education, set up a training centre to train young girls as nursery assistants with the ‘task of nurturing slum children’ (Steedman, 1990, p.184), continuing to face the same dilemma of empowering women while at the same time consolidating their limited role as caregivers. 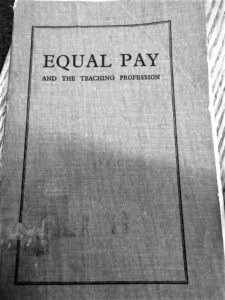 In the early 1920s, the National Association of Schoolmasters (NAS; previously known as National Association of Men Teachers or NAMT), was established within the National Union of Teachers (NUT), with the intention to oppose the ‘equal pay for men and women teachers’ referendum. In 1921, the NAS published the ‘Equal Pay and Teaching Profession’ that legitimised the pay gap by pointing to essentialist perspectives such as men and women being biologically disposed to certain roles. Among these were discourses of ‘men as disciplinarians’, ‘women as carers’, ‘men as sportsmen’, ‘men as role models for boys’, ‘men as breadwinners’, just to name a few. Thankfully, the attempts of NAS did not gain ground, however, this also meant there would be fewer men working in early years education.

It was not until the Plowden report (CACE, 1967) that this discrepancy was highlighted, saying ‘there were only 97 brave men out of a total of 33,000 teachers’ (p.313), which was only 0.3% of the workforce. This was the first official document that sought to recruit more men within the ECEC and primary sector, specifically suggesting ‘educational and practical’ (CACE, 1967, p.324) benefits for hiring more men and purporting to schools being ‘more stable’(ibid.) as a result of this.

Back to the Future

This brings us back to our current scenario with governments and other organisations focused on recruiting more men into early years education with the intention of making the workforce more ‘diverse and balanced’, gender equal and with benefits for young boys (DfE, 2017).

Though these intentions may appear ‘good’, as Warin (2017) points out they are based on essentialist perspectives, with men and women claimed to possess fixed qualities in relation to their biological make-up. Contrary to this, gender has been widely viewed by researchers as socially construed, with the potential to evolve over time, and lacking in ‘fixity and homogeneity’ (Skelton et al., 2006, p.11; Butler, 1990; Nicholas & Maniates, 2016). Furthermore, the biological determinist perspective fails to account for the huge diversity of expressions that exists amongst men. By assigning certain attributes to the role of men in early years, there is a risk of excluding and marginalising large numbers of men who do not neatly fit in those categories (Carrigan et al., 1987). Therefore, if we really want to focus on gender diversity in the early years workforce, then perhaps like Warin (2017) suggests a movement away from ‘gender complementarity’ to ‘gender flexibility’ would be more appropriate.

A gender-aware and power-conscious workforce

When it comes to gender equality, Moosa and Bhana (2017, p.366) conclude that oftentimes ‘gender binaries and unequal power relations’ are maintained by those in the sector, with men occupying traditionally masculine roles (disciplinarians, sportsmen, male role models, and leaders), while women, feminine roles (carers and female role models). Having more men therefore does not automatically translate into a more gender equal workforce. Moreover, it is suggested that teachers who come into the sector must be trained to be gender conscious (Eidevald & Lenz Taguchi, 2011).

‘ECEC practitioners must learn to recognise the subtle and often invisible ways that traditional gender norms can persist within the power plays of the school and they must be alert to possibilities for gender flexibility and transformation.’ (Warin, 2017, p.12).

My own experiences as someone perceived as male confirm these propositions. Many times, I felt there was an expectation that I assume certain roles that resembled the role of a father in traditional patriarchy, where discourses of men as disciplinarians, sportsmen and decision makers were imposed upon me (Burn & Pratt-Adams, 2015; Brownhill & Oates, 2017). Other times there were assumptions that I would take on leadership or management roles simply because of my status as a male. Many recruiters often have looked at me with surprise when I have rejected managerial or senior leadership positions, in favour of working directly with young children. Williams (1992) refers to this as the ‘glass escalator’ (p.253) phenomenon, where men are said to experience hidden advantages simply because of male privilege. Carli & Eagly (2011) trace such beliefs about leadership to gender hierarchies formed in particular economic conditions, and reject evolutionary perspectives that attempt to promote men having innate leadership capabilities over women.

National statistics and international league tables both show the overachievement of girls in comparison to boys (DfE, 2014; DfE 2016; OECD, 2016). As mentioned earlier, this has led to the formulation of a simplistic solution of hiring more men, in hopes of closing the attainment gap. In other words, female teachers are seen as failing boys. However, in research that drew on data from 413 classes for eleven-year olds, comparisons were made to see if the gender of the teacher had any conclusive impact on the achievement of children. The study showed that the attainment of children was unrelated to whether the teachers were male or female (Carrington et al., 2005; Roberts-Holmes & Brownhill, 2011; Burn & Pratt-Adams, 2015; Brownhill & Oates, 2017).

‘There is a substantial body of evidence showing that it makes little difference to pupils’ achievement whether they are taught by a man or woman teacher’ (Skelton, 2012, p.10).

Thornton and Bricheno (2006) point out that such a script did not exist for girls when they were ‘failing’ in relation to boys in the past, further suggesting that these initiatives may have a primary incentive ‘to prevent wastage of economic talent and capacity rather than concern for more equal treatment’ (ibid., p.2).

When considering the historical context and current literature in this area, the ‘we need more men’ script is greatly found lacking. This article suggests a moving away from simplistic binary discourses to engaging in alternate stories that take into consideration the complex, and multipicitous nature of gender and gender diversity.

In conclusion, I believe that initial training centres and recruiters have a huge responsibility in ensuring the workforce is gender aware and sensitive, so as to create gender rich and diverse early years spaces.

‘[The] potential to challenge gender essentialism is not simply achieved by recruiting more men. It can only be achieved through the development of gender sensitivity and the deliberate construction of a gender-flexible pedagogy’ (Warin, 2017, p.14).

Roberts-Holmes, G. & Brownhill, S. (2011) Where Are the Men? A Critical Discussion of Male Absence in the Early Years. In Miller, L. & Cable, C. (2011, Ed.) Professionalization, Leadership and Management in the Early Years London: SAGE Publications Ltd.